Who has won the contract? - Identifying the bidders of public procurement processes

In the last couple of years there has been a strong push by political leaders and civil society towards making beneficial ownership more transparent. There are various very good reasons for this, varying from making it more difficult to disguising the beneficiary of transactions, or using shell companies for illicit purposes such as money laundering and hiding stolen assets. In the arena of public procurement there is the suggestion to start by publishing beneficial ownership for bidders for public tenders. We applaud this but we do not think this is enough. To be able to trace where public money goes, prevent collusion in public procurement, and track organisational performance more broadly the most important prerequisite is to have unique identifiers for both bidders and buyers.

Public procurement implies a business transaction between two parties - a buyer and a supplier (bidder). Due to its nature this is usually a public-private deal in which the buyer is a public entity and the (winning) bidder is usually a privately owned company. To monitor the procurement cycle and analyse bidding patterns it is important to be able to clearly identify all parties involved in the process. Within our project DIGIWHIST we have researched 35 jurisdictions and analysed their tender landscape (you can find full report here. The results are disillusioning - only 10 of the legislations covered make unique identifiers for buyers and bidders mandatory in public procurement announcements.

The identifier for the buyer is especially challenging since we are mostly dealing with company names when identifying bidders and suppliers. This system is particularly prone to error, since one company might have placed bids under names that differ. Even if those names just differ by one letter (which could be just a typo) - there is never the certainty we are dealing with the same company. 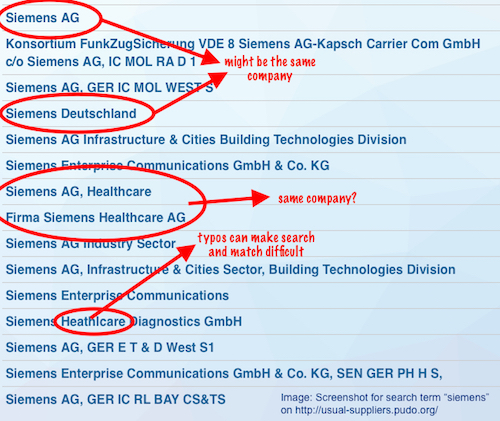 When using the the usual suppliers database, a database that covers suppliers from the European Tender Electronic Daily for Siemens, a great number of companies return. However it is not clear whether they are the same company under different names or not related.

Unique identifiers for organisations prevent those errors. They usually consist of a combination of numbers and letters, one example being the one proposed by the Open Contracting Data Standard. In the case of companies those identifiers usually at least entail the fiscal code under which they are registered. In Portugal, organisational identifiers are given to both, bidders and buyers. When looking at the Portuguese procurement portal it seems also not clear at first sight whether Siemens Health Care is the same company as Siemens - but in the detailed overview the organisational identifier tells us that the company under all three names is actually the same.

Whenever there is certainty over which company has actually won the contract, we are able to draw conclusions like **analysing bidding patterns of specific companies**, making statements on which companies won the most contracts in a specific region (for examples of such analysis see [here](http://www.govtransparency.eu/index.php/2015/11/13/toolkit-for-detecting-collusive-bidding-in-public-procurement/)). Once the buyers can be identified, the **analysis of spending efficiency and organisations’ spending structure** is possible.

The solution to this seems to be simple involving little additional administrative burden - adding organisational identifiers to the requirements for public procurement announcements. We ask governments in the EU for three simple steps: